Active Campaign vs Clickfunnels is a rather unusual comparison because those software solutions are meant to do different things. You’ll be maybe surprised who wins this comparison. They have some similarities in common but also huge differences. One of them is an email software the other a funnel builder. But finally you’ll get the most out of those two software products by combining them!

What is Active Campaign?

Active Campaign is one of the best email autoresponders that you could use. It’s very intuitive, easy to integrate, has a beautiful visual builder and tagging features.

A lot of companies are fighting over the best email autoresponder. This one has the potential to be at least in the top 3.

The visual builder gives you a great overview of your campaigns. You can quickly map out a email marketing system without making it complicated to connect lists, segments and forms.

The email automation feature is designed intuitively, simple but yet very powerful. You can utilize tagging, audience segmentation and dynamic automations through triggers. Thus making the automation feature of Active Campaign one the most powerful out there.

Personally I’ve been using KlickTipp, Active Campaign, Sendlane, GetResponse, Convertkit and AWeber over the time. Out of this list, Active Campaign was the one that needed the least amount of learning and also gave the most features for the price. Especially in comparison to the rest.

Cons of Active Campaign – Not suited for you if…

To be honest, there aren’t any technical relevant cons. Nevertheless I’m using Aweber now for one particular reason.

As for Affiliate Marketing you’ll need a affiliate friendly email software. A lot of providers do not allow affiliate marketing for their email autoresponders.

Because there are a lot of spammy types of affiliate marketers, Active Campaign as well as other companies suspend affiliate accounts very quickly. Those providers are in fear their delivery rates can drop through a spammy approach to affiliate marketing.

I made this experience myself, without even being spammy at all. But Active campaign was rigorous in banning accounts with any sort of affiliate marketing approach.

There are certainly affiliate marketers out there using the software and being very cautious in their approaches to affiliate marketing. Anyways you’ll be in permanent danger of your account getting suspended.

That can be the case for any Email software. There are just 2 providers, that I know that are affiliate marketing friendly. One of them is Sendlane. Sendlane being fairly new is affiliate friendly, because it’s founded by affiliate marketers.

Before using it I made sure to talk to the support in order to be safe on my affiliate journey. But I experienced a buggy software not sending out emails as they were set up.

Finally Aweber seems to be the affiliate marketing friendliest email software out there, having years of experience and decent delivery rates.

So if you are an affiliate marketer I strongly recommend to use AWeber, instead of Active Campaign.

What is Clickfunnels and how does Active Campaign stack up against it?

Clickfunnels is a funnel builder, that specializes in delivering your products and services in the best possible manner, maximizing your results.

Considering the pricing in Active Campaign vs Clickfunnels there is no doubt about the winner. Active Campaign can start with $9 dollar the month for 500 contacts, if you upfront annually. Of course the price rises linearly to the amount of contacts you collect.

In comparison to that Active campaign will charge you that amount in the professional plan, when you reach 10.000 subscribers.

So when you are getting started with email marketing you shouldn’t go for the enterprise plan. It’s not worth it yet,

Unfortunately, Actionetics and Actionetics MD are being sunsetted because of a major update replacing Etison Suite by the new Clickfunnels Platinum. However, in case you are looking for other email automation tools that integrate with Clickfunnels, I’ve got this article for you!

Finally you can see that those two aren’t really comparable because they fulfill different needs. While Active Campaign is a email software for collecting leads and email automation, Clickfunnels is a funnel builder.

Even more, Clickfunnels is capable of building any sort of funnel system, no matter if webinar, membership site, squeezepages or ecommerce products.

The best possible scenario to get the most out of both is to combine them. They integrate seamless with each other. You can build landing pages, that redirect into your funnel systems, while collecting leads and follow them up.

As mentioned above, if you are an affiliate marketer I would rather recommend Aweber for your email marketing.

It has a similar price to Active Campaign and you can start to collect leads for your funnels. It integrates as well as any other software with Clickfunnels and you will get a free trial for both of them.

Get Your Free ClickFunnels 14 Day Trial

Active Campaign vs Clickfunnels? The Answer Will Surprise You! 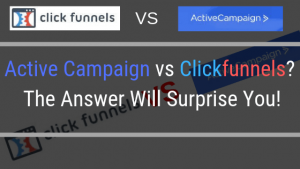 Those two aren’t really comparable because they fulfill different needs. While Active Campaign is a email software for collecting leads and email automation, Clickfunnels is a funnels builder.Even more, Clickfunnels is capable of building any sort of funnel system, no matter if webinar, membership site, squeezepages or ecommerce products.The best possible scenario to get the most out of both is to combine them. They integrates seamless with each other. You can build landing pages, that redirect into your funnel systems, while collecting leads and follow them up.

Is ClickFunnels a Scam? The quick truth

What Is The Best Funnel Software? – 9 Great Builders